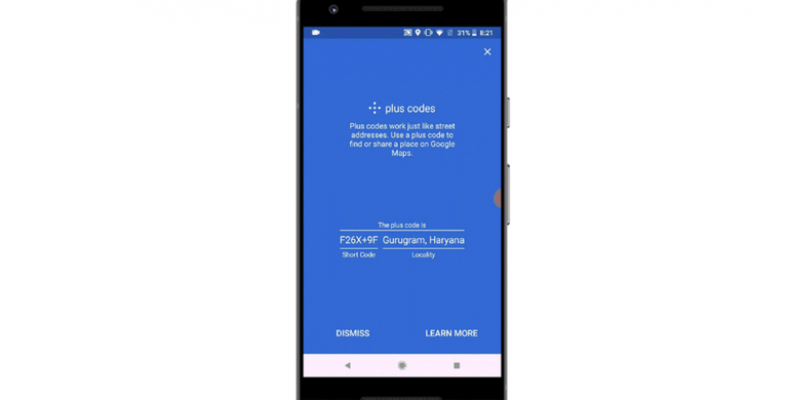 Google Secure the Remote Areas with Plus Codes Support

Google with its Maps wishes to offers best navigation and place search functionality to the users. But it has found serious shortcoming when it comes to large countries with a greater portion of remote areas. In order to make remote location more recognizable it has added the support for the plus codes in the Google Maps. Plus codes will effectively work as an open –source addressing system which helps in generating easily understandable street addresses for the users and places which doesn’t have the address on maps.

The features of the Plus code system

The plus codes system has been devised by the Google help in identifying the remote location by carefully dicing the vast geographical surface of the earth into tiles areas. After which a unique code is given to it which has six characters along with a “+” symbol and the particular name of the city.

These features will be a boon for the countries with vast boundaries locales and the end users will be able to start using the Plus codes to mark the places on the map and make its easily reachable for the others.

The thing about this system is that end users will be able to point on any place on the Map and generate a code against it which can be later shared and searched by anyone. These codes can be searching by simply typing in the search field either from the desktop or mobile maps.

The Plus Codes system would not be limited to a certain country rather it is being deployed on the global scale to allow users to allocate the remote location with ease than ever before. It is worth noting that many remote areas in India don’t even have an address which makes it really different to reach out or make others aware about.

There is no denying that reaching any given residential address is extremely challenging task for anyone without having the exact location details. Therefore this unique format will come in handy in quickly identifying the regions, localities and areas without much hassle.

Google Maps are great when it comes to finding and locating address which already has well defined street names and house numbers but things changes drastically once we move away from the urban population and ventures in the remotes areas.

In the recent times Google has launched a number of new features like “add an address” which allows users to submit new and missing addresses on Maps. It also has a smart address search system which even suggests search results based on the popular search terms like the landmark as well as the points of interest.

Google also trying to bring more information with the Map area views in order to enhance the driving, navigation and transit experience. The plus codes system is the best way to connect the remote areas to people and improving the Google Maps potential at the same time.