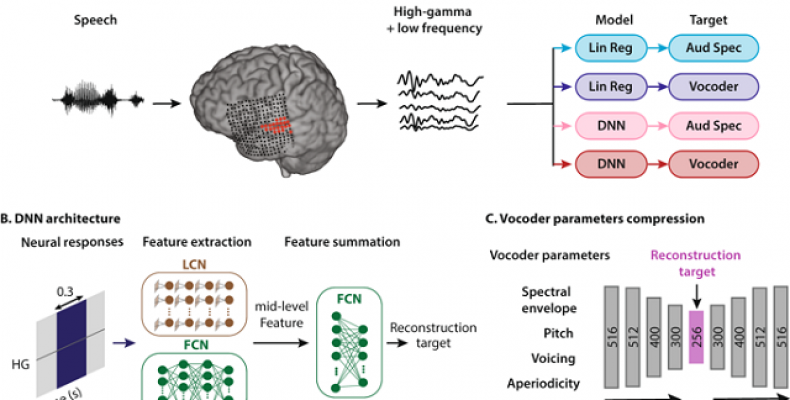 Gadget that Translates Thoughts into Speech

Being able to speak and communicate our thoughts to one and another is fundamental to being human.  Imagine if you lost that ability and were never able to speak again. How’d you think you’d feel? I know I’d feel devastated if I were to never speak again. To never be able to talk to another human being again would be a significant set- back for anyone.  But what happens if there was a device that was able to translate our thoughts into actual speech? Researchers up at Columbia University have invented just that. Yes you read right. A gadget that translates your thoughts into speech. This will have a great impact on people who have lost their speech abilities.

Researchers at Columbia University say that losing one’s voice to disease or injury is awful. Not being able to communicate with our loved ones even more so. So they have found a way by which our thoughts can be converted into speech.

The Gadget that Translates Thoughts into Speech:

The Columbia University researcher’s study begins with an algorithm that produces what sounds like human speech. This is apparently the same tech that you find in Amazon’s Echo and Apple’s Siri. These gadgets give verbal responses based on our questions.

The next step was asking Epilepsy patients who are undergoing surgery to carefully listen to sentences being spoken. While they would listen, researchers would look for neural patterns in their brains based on what they were listening to. This neural activity became the foundation of the researcher’s algorithm. This algorithm came to be known as “vocoder” an algorithm that translates thoughts into speech.

Next Was Testing Time for the Gadget that Translates Thoughts into Speech:

Finally, it was testing time. Researchers asked the same epilepsy patients to listen to numbers being recited from 0 to 9 while they mapped their brain activity. After that it was time to run the recording of brain activity through the algorithm or Gadget that translates thoughts into speech. The researchers then had a neural network analyze and clean up the recordings.

The researchers asked 11 people to then listen to the translated speech to test its intelligibility. They found that the people listening to the speech could understand it about 75% of the time, which is more than any previous attempts. The vocoder which is sensitive to a person’s thoughts as well as powerful neural networks, all enabled the effective translation of thoughts into speech.

Looking beyond with the Gadget that Translates Thoughts into Speech:

At present the gadget only translates thoughts as a person listens to something. But researchers are willing to take their gadget that translates thoughts into speech a step further. The next step is to translate a person’s thoughts, that is whatever they are thinking, into verbal speech without any listening being involved.

This would work by a person thinking something and the brain activity that was generated from that thought would be translated into speech.