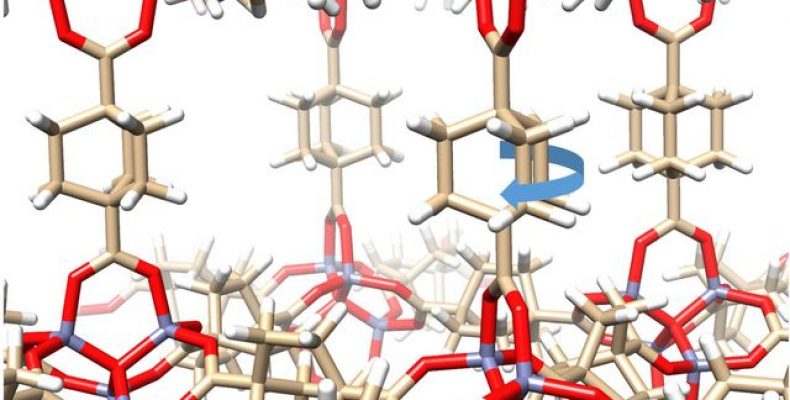 Gyroscope Molecules Form Crystal Both Solid and Full of Motion

A crystal is formed while the molecules get packed tightly, and no space is present for the movement. Though these crystals are much durable and sturdy, they cannot be compared to the molecular machine. We are now going to know about a new crystal, which has motion but has also static nature.

Molecular machine- Get an idea of it–

Molecular machine is such a system, which include various molecular elements for producing quasi-mechanical movements for responding to the input. This machine is very small in size, and due to the technological development, it may gain the potential of destroying the harmful cells, causing cancer. It can check out our body to find out the symptoms of any disease. However, in many cases, to run this machine, there is a need of various movable units, and thus, you can find issues in creating biological system.

Now, the researchers from UCLA have found out an interesting fact. They have created new crystal from molecules, and the structure of this new output is almost similar to that of gyroscope. Each of the molecules may have external case, which surrounds the revolving axis. That is why the crystals have also sturdy exterior part.

In one of the biographies, we can find the description of this newly formed crystal. Miguel García-Garibay, a chemistry professor of UCLA, has stated that they have crafted a unique crystal, which is not only mobile but also static. In short, it is amphidynamic in nature. The elements, present in the new crystal, move at a very fast rate, just as we find in outer zone.

How the scientists have created the new crystal?

The researchers have tried to form various molecular machines, and so, they have focused on glass-like crystals. These crystals are designed to be applied in any LCD screen of modern televisions. Moreover, nature is also the source of this type of crystals. However, the difference is that the movement of these crystalline elements is slow. At this point, we like to present an instance to make the idea clear. The position of every molecule should be altered to adjust the way of reacting with light rays.

The scientists have tried out various methods, and finally, they have created the right structure. This structure has metallo-organic cover with carbon unit and metal ions. While doing the tests, they have found out the compound, known as octane dicarboxylic acid. A special framework created by them functions as the amphidynamic component.

Kendall Houk, Organic Chemistry professor, has stated that they have applied one equation for the assessment of motions, which are present in the structure. The fast motion in the element is really one of the best innovations. The team is trying to add fresh property to BODCA-MOF, and the stimulus will modify the motion of molecules.

Their major intention behind experimenting with new crystal is to regulate the motion or movement of molecular systems. It will enable them in forming materials, which are effective for responding to stimuli. This may also help them in presenting a faster electronic and computer display.