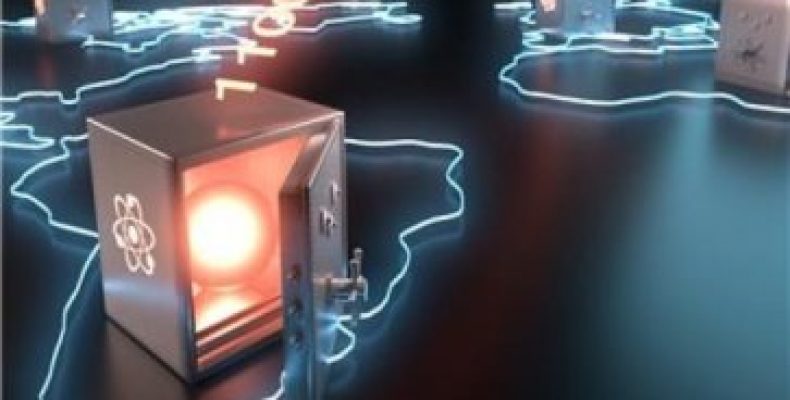 Long-lived Storage of a Photonic Qubit for Worldwide Teleportation

Or almost! Because the new milestone that scientists have just marked amazes and predicts a headline as spectacular as the one expressed and also in the not too distant future. For now they are satisfied with having stored a quantum unit of information (Photonic Photonic Qubit) in an atom for enough time to consider this experiment a very important advance in the future of this technology. And if advances continue at this rate, the quantum will end up giving away the definitive computer very soon.

In the field of medicine, genetic engineering and molecular biology are the ones that stand out. If you look at the cosmology, the most commenting on the things that have the word “dark” as a tagline. If we look at physics, everything is dominated by the LHC and its particles.

But if we stop to look at the world of computing, the first thing that appears is the quantum. The quantum that diffuse thing that nobody understands well but that everyone has in their mouths. And from the hand of this invited guest we get another surprise in scoop.

A group of international MPQ researchers have achieved something unusual. They have managed to save a Photonic Qubit of information in a phosphor atom for 1.75 seconds. And you will say what? Photonic Qubit of those I breakfast a few every day in front of my computer.

Not so much, friend. You can snack, at best, a handful of bits that are the unit of information that governs our macromolecular world. In this field, a bit means that a switch can be either on or off, that is, it can have only two values.

And with that simple premise, all current computing is built, with our gigabytes and our Pentiums. But at subatomic levels, that place so small that we can not even imagine but exists, things do not happen this way.

In the quantum world, subatomic particles manage to exist in multiple states simultaneously: that is, they can literally be in two places at the same time or possess a number of otherwise mutually exclusive properties.

And what does this quantum property of being contribute or not be simultaneous? Well, the processing power is multiplied to a few stratospheric levels. Where before a computer needed thousands of years to decipher a key, now they could achieve it in several seconds.

For each atom that is added to the chain, the number of possibilities increases exponentially by two. And that is a lot. So much so that we can not even imagine the colossal processing capacity that these data reflect.

Perhaps we clarify better saying that there are 13 billion blue discs full of data to the flag. We do not exaggerate when we say that the Internet fits in a 1-kilo gold bar. And there’s still room for more.

And what makes this news so special? Some time ago it was trying to store information in atoms and even in photons but nothing relevant had been achieved because the superposition of states in the electron is a very fragile thing that as soon as it interacts with the outside, it modifies its value irremissibly.

What has been achieved on this occasion is determined by the new studies of a multidisciplinary group. The team, with scientists and engineers from Oxford and Princeton, as well as the Lawrence Berkeley National Laboratory, reported a solution to the problem in the journal Nature on October 23: a hybrid invention that uses an electron and the nucleus of a phosphorus atom embedded in a silicon crystal. Within the crystal the electron is more than a million times larger than the nucleus, and it has a magnetic field thousands of times stronger.

This makes the electron appropriate for its manipulation and measurement, but not very good for storing information, as it is easily destroyed. This is where the atomic nucleus intervenes: when the information in the electron is ready to be stored, it is carried inside the nucleus where it can survive for much longer time, between 1 and ¾ of a second: enough and even enough for its processing.

“With the Berkeley laboratory glass we were delighted to see that memory times exceeded the threshold for information processing,” says Steve Lyon, Princeton team leader. Before this breakthrough, quantum information had not been preserved. for a few tens of milliseconds ”

Well, we have already managed to keep the information for long enough to apply a correction of errors and thus get the data remain indefinitely. Errors occur when a bit is accidentally turned over and says ‘1’ when in reality it means ‘0’, or vice versa. Ordinary computers can protect themselves from this error by using redundancy.

In a program, the data is sent in triplicate, so that 101 becomes 111000111. Small and simple programs are alert in search of corrupt trios such as 010 or 110, and restore the wrong bits to fit the other two . For quantum computing, correcting errors is more complicated but it also works.

In summary, although it seems that 1.75 seconds hardly mean anything, in reality they represent the difference between being able to store quantum information in an atom in an unlimited way or not, which in turn will allow a definitive development of this technology.

The bits will not take long to be replaced by their brothers the Photonic Qubit. And when this happens, be assured that the advance will be so spectacular that a new era in the history of humanity will begin.

Imagine the innumerable lines of progress that would mean a quantum computer with such power of process and storage. Physics, medicine, genetics, chemistry, telecommunications. All branches of knowledge would inevitably be accelerated at the speed of light.

TCP Vs UDP: What’s the Difference?