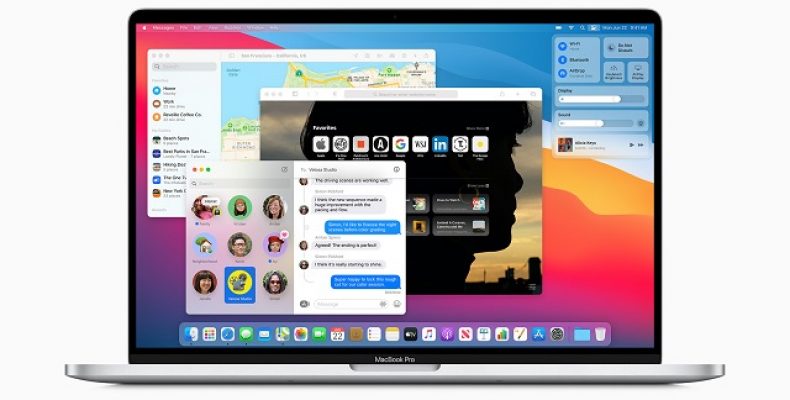 Come WWDC 2020, Apple started on it’s project of overhauling the Mac. A part of that overhauling has to do with infusing the mac with a new feature set in the form of macOS Big Sur.  Only a few days later and the beta version of the OS is out. Right of the bat, the new macOS Big Sur is bright, consistent and clean. The new OS also has features that bring the macOS more in line with features that are commonly seen on iOS and iPadOS. More on macOS Big Sur a little ahead..

As mentioned earlier the first thing you notice with the OS is that it looks clean, bright and gives you consistency in use. Now coming more to the specifics.

Opening up the OS the first thing you notice;  the dock now lined up with new and colorful icons. While some look a bit sloppy, like the Quicktime icon is replaced with a Q over a blue background, others are a little more well thought of in appearance.

Coming on to the menu bar- it appears translucent which is a cool new addition to the OS. The only difficulty is that people with impaired vision may not like the new feature. The menu in macOS Big Sur seems to blend in with the background giving it that translucent feel. The menu bar sitting on the right of the screen seems to have got an upgrade as well.

More on the new macOS :

Icons such as the volume button, AirPlay, Wi-Fi and others have all undergone a makeover with many of the icons looking much like what the iPhone and iPad have to offer. Besides the icon change, mac has also got a new feature by way of a control center. The new control center helps in removing some of the clutter in the main menu. The control center on the mac now has utility icons such as Wi-Fi, Bluetooth, AirPlay amongst others. If you happen to like seeing your utilities back in the main menu you can always drag and drop them there.

As for the apps, many of them have undergone a new look as well. Some apps now come with full height side bars and new icons. These new icons are somewhat similar to what you have in the iPhone and iPad.

Safari too has undergone a new and massive makeover. This helped in part by a faster and more efficient browser experience. Latest Safari with a clean interface and a customizable start page that look just that way you want it to.

The tabs too better done up with user friendly interfaces a well as a preview of what the tab does when you hover over it.

Another great addition to the browser has been in the form of a Privacy report. This new and handy feature tells you how many trackers were encountered when visiting a particular site and how many of them were blocked using Safari’s cross site tracking.