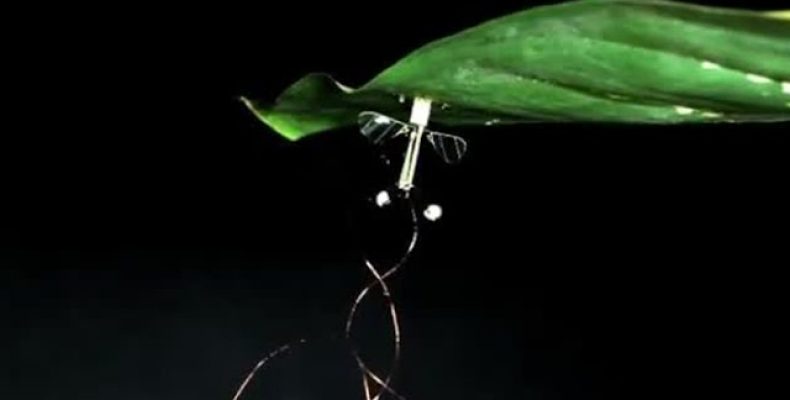 Flying robot capable of sticking and detaching electrostatically to surfaces.Biting smoke is in the air and obstructs the view, cars stand transversely: an accident in a tunnel, about a number of the participating vehicles and the number of injured, is nothing known. As well as? For the large fire-fighting vehicles, there is no passage, the extent is correspondingly difficult to judge. A man stands with a flashing light and a focus is on a screen in his hands.

Beside him stands a device on the ground, just a narrow meter in diameter. A push of a button, slowly and loudly surrends it into the air. It is a kind of helicopter, but one with four rotor blades instead of a single, therefore the name Quadrokopter. The four rotors sit on sideways protruding arms. This design gives the vehicle stability in the air: the quadrocopter can precisely hold onto a position, and it can be precisely controlled. Meter by meter the pilot controls the robot over the accident site, next to a car it drops it. The small headlight of the aircraft lights through the side window. The video camera captures a man on the driver’s seat; he is obviously unconscious, as the firefighter can recognize on his screen.

Researchers have designed a flying robot that can adhere to a wide range of surfaces.

This technological breakthrough provides yet another example of how engineers can learn from nature to build the next generation of flying robot.

Flying robot can serve many valuable purposes, such as examining a place after a natural disaster or detecting dangerous substances, but the act of flying consumes a lot of energy. Positioning on a surface while conducting a mission provides a way to dramatically reduce energy costs and increase missions duration. While there are several different options to create a flying robot that can stand on a surface that is not necessarily the floor (it could be a wall or another almost as slanted, and even a roof), not all move well to very small robots. For example, applying a chemical adhesive to help it bond to the surface may facilitate the initial landing, but can be problematic when the light robot needs to move away from the site and resume flight.

This is where the team of Moritz Alexander Graule, from the School of Engineering and Applied Sciences (SEAS), attached to Harvard University in the United States.

Graule and his colleagues created a flying robot of biological inspiration, called RoboBee, that is posed and maintained at the landing site using electrostatic forces. That flying robot allows you to land even on roofs. In the upper part of the small flying robot they placed an electrostatic “patch” that uniformly distributes a static electric charge. The patch is made of foam to help cushion the impact of the landing, so the robot does not bounce off the surface.

The RoboBee weighs about 100 mg (a weight similar to a real bee). When a load is applied to the patch, it can adhere to almost any surface, from a glass to another wood, and it is not even imperative that it be perfectly smooth, as shown by one who has managed to stick to a leaf. To release, simply power off the patch.

Inspired by the visual technique that honey bees use when landing, team members developed a system of motion tracking cameras that help the flying robot align with its “runway” landing or target.

Through a series of experiments, the team has demonstrated the ability of the robot to perch on a wide range of surfaces, including glass, wood, and even a natural plant leaf, and then take off from them to resume their flight.