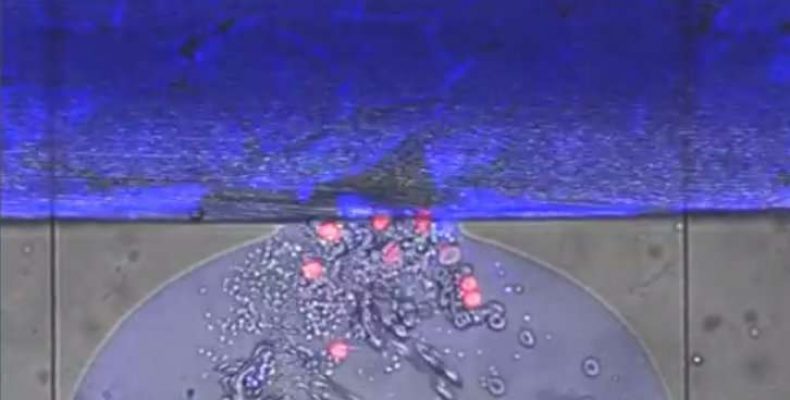 Biomedical engineers have created a miniature self-sealing ‘wound’ model in order to study bleeding and subsequent clotting of wounds. They hope their research would enhance discovery of various drugs and become a potential diagnostic tool.

A complete description of the self-sealing wound and its representation in movie form were scheduled for publication by Nature Communications.

The clotting of blood is a process where the damaged blood vessels, platelets and blood clotting proteins form a mesh together with the blood that flows out.

The self-sealing ‘wound’ model is the joint team work of Lam’s group at Emory and Georgia Tech and Shawn Jobe, MD, Ph.D. at the Blood Center of Wisconsin.

The self-sealing ‘wound’ model is the first of its kind to reproduce all the aspects of blood vessel injury that takes place in microvasculature – loss of blood due to trauma, clot formation and repair of the blood vessel lining. The model however, does not account for smooth muscles neither does it reproduce aspects of larger blood vessels.

How does the self-sealing ‘wound’ model work?

Hemostasis is a process which causes bleeding to stop. The blood coagulates, forming a blood clot. This is the first step in wound healing.

In the self-sealing ‘wound’ model, a complete in vitro mechanical injury bleeding module has been developed. The human endothelial cells that line the blood vessels are cultured on top of a pneumatic valve. The wound is created when the pneumatic valve is activated; opening what is called a trap door. Donated human blood is allowed to flow through the wound which is about 130 micrometers across. Hemostasis is noticed and the bleeding time is measured.

In the accompanying movie, it is seen that most of the blood cells are grey. The erythrocytes are round grey donuts and the smaller dots are platelets. The red colour cells are the white blood cells. At the top of the wound, there is green extracellular “glue”, which is the blood protein, fibrin that holds the clot together.

When there are alterations or any manipulations by drugs, the self-sealing ‘wound’ system produces clotting disorders. Blood that is taken from Hemophilia A patients form abnormal blood clots and the bleeding time is prolonged.

According to the authors in the Nature Communications paper, they have described how the drug eptifibatide affects the interactions of platelets and other cells in the 3D version of the self-sealing ‘wound’.

With the self-sealing ‘wound’ model, the interactions of the various components involved in hemostasis can be investigated. The effect of anti-platelet agent on clot contraction and unstable hemostatic plug formation and alteration in fibrin structure in those with Hemophilia A blood can be visualized. It also shows the importance of endothelial cells for hemostasis to take place.

All these aspects can establish the clinical utility of the self-sealing ‘wound’ model.