Design and display of Google  Pixel 2

Although only a few images of both Google Pixel 2 terminals have come to light, they showed enough to give us a clear idea of what we will find next Wednesday.

The Google Pixel 2, of course, will be the content size model of this new family. In addition, its design will be very similar to the previous generation Pixel. The rear, made of aluminum, includes a glass panel that surrounds its unique photographic sensor, but leaves the fingerprint reader out.

If we turn the terminal around, we will find some rather pronounced frames that surround his panel of 4.99 inches Full HD Amoled, although they include a small surprise that we will comment later, when arriving at the multimedia section. In addition, we will finally enjoy protection against water and dust with an IP67 level.

If we pass the older brother with the surname Google Pixel 2 XL, we will find a somewhat larger terminal, though not too much. The back of the Pixel 2 XL will be identical to the smaller model, except for the detail that the photographic sensor is located to the left of the LED flash, and not to the right as in Pixel 2. Where we are going to find differences – and enough, in addition – will be on the front. 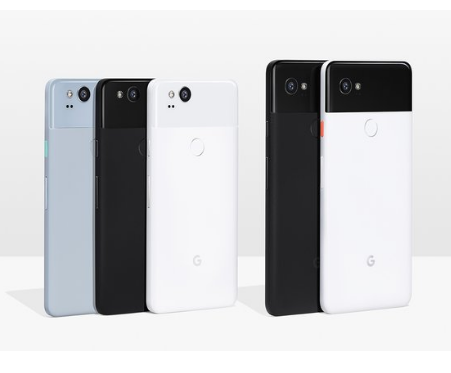 For the first time, Google will be adding to the bezel-less fashion, reducing to a minimum the margins surrounding the 5.99-inch POLED Quad HD + panel, with aspect ratio of 18: 9 and support
for Wide- Gamut RGB. The IP67 protection will also be included in this model.

Internally, it is more than confirmed that both terminals will have the best of the best. The Qualcomm Snapdragon 835 will be responsible for giving life to the new Google phones. Both the Pixel 2 and the Pixel 2 XL will have 4 GB of RAM and 64 or 128 GB of storage, and chances are you will not be able to use a microSD card to extend this memory. The capacity of its batteries will be 2,700 and 3,520 mAh respectively, both endowed with technology of fast load.

Exclusive software and features of Pixel 2

If there is something that Google Pixel stand out from the rest of the market terminals, it is because of the unique functionality that these terminals include, both hardware and software. This time, Google would have decided to take inspiration from HTC – one of its latest acquisitions – to introduce the Active Edge mode into its new pair of handsets. This feature, just as we saw on the HTC U11, will allow us to perform different tasks simply by putting pressure on the sides of the device body. Hopefully one of the main uses of this feature is to run the Google Assistant without having to interact with the screen.

On the other hand, the new Google phones will be among the first in the market to have support for e-SIM, the new generation of virtual SIM cards.

At the software level, although it is expected that Google surprises us with new additions, we know that both terminals will feature a “music recognition” function. In this way, whenever a song is playing close to us, the device recognizes it automatically and shows us information on the lock screen. Holders of these handsets will also enjoy unlimited storage on Google Drive until 2023, and for the first time in the history of Google phones, there will be an Always On Display mode.

In addition to all of the above, it is worth mentioning that in this new generation of smartphones will introduce a Pixel Launcher with a completely renewed distribution – and that we have already been able to see in images – that will have the search bar under the icons of the dock, while the top will be intended to display information relevant to the user in a widget.

In the previous generation, the Pixel phones were crowned as the kings in terms of mobile photography. Its 12-megapixel sensor, coupled with an excellent set-up by Google, as well as the computer photography system integrated in the software, made Pixel cameras the best on the market, and even today continue to give what to talk about if compared to some of the latest releases.

Maybe that’s why Google has no intention of making the jump to the double camera, and will include a single main sensor in its new terminals. This sensor, which will be used by both variants, will be 12 megapixels and, this time yes, will have an optical stabilizer. Although the technologies included by Google in the photographic system of its new devices are unknown, we do know that the big G has implemented an exclusive ISP -Image Signal Processor under the name “Imaging Chip”. In addition, despite not having two cameras, we will be able to enjoy the famous “portrait mode”.

But here do not end the surprises on the multimedia section. At the audio level we will also find some other detail worth mentioning. The first, and for many, the most important, is the elimination of the 3.5mm jack port for headphones, practically confirmed in both variants of the Pixel 2. However, not everything was going to be bad: both the Google Pixel 2 like the Pixel 2 XL will have a double front stereo speaker.

Availability and price of Google Pixel 2

Perhaps the availability of the new Pixel is the most difficult to predict information, especially given the distribution problems of the first edition. However, according to recently confirmed sources close to the company, it is expected that the Pixel 2 goes on sale on October 19, while for the Pixel 2 XL we have to wait a month, until November 15.